Today we take a look at the golf swing release of a true legend of the game, Lee Trevino.

Trevino’s release is amazing and seems almost unreal.  Few players in today’s game swing this way.  But there are still a lot of useful things for the Occasional Golfer to glean from this golfing legend.

Trevino, the winner of six major championships, had a home-made swing that looks a bit odd and awkward at first.  Don’t let this deceive you.

Lee was, and is, regarded as one of the games all-time great ball strikers.  So obviously he did a lot of things right and could do them right under extreme pressure.

Most importantly, he had a golf swing that the Occasional Golfer can emulate successfully.  Let’s have a look at Lee hit a few balls:

Some notable things about Lee’s motion are that he has a pronounced starter move (for example, 0:05, 0:24, 1:05), a fairly short backswing, and a huge down-the-line clubhead release.

Indeed, it looks as if he is literally hurling himself down the target line, chasing after the ball.  This is the key to his consistent ball striking — he is able to keep the clubface square to the target line for an incredibly long time with this unique golf swing release motion.

Hence, he can hit the ball with a very shallow descending blow, another key for consistency.

To study his release a bit further, study the swing sequence from (0:38) to (0:42).  I’ve stopped the action at a few key points, and drawn horizontal and vertical reference lines below: 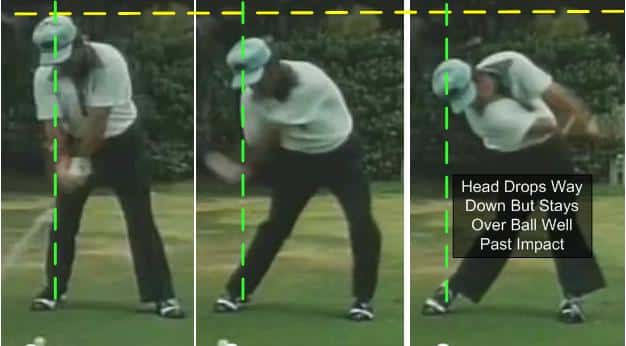 Lee Trevino stays centered over the ball despite his aggressive “Chase the Ball Down the Line” move on the downswing and release.

Note how much Lee drops his head on the downswing and release (nearly a foot!, more even than another great ball striker, Tom Lehman) as he chases his clubhead down the line.

Despite this “bear down” move on the downswing, his head does not move laterally.  It remains lined up with the green dashed line, and he remains focused on the golf ball.  So, strictly speaking, Lee does not keep his head still at all during the swing.

But he does not move it laterally either, and keeps his eyes focused on where the ball was well through impact, so

Did you miss our previous article…
https://news-golf.com/golf-lessons/golf-swing-tips/shot-scope-v3-review-the-leader-in-performance-tracking/