In this article, we take a look at two very different approaches to the golf swing plane, especially the backswing plane, as demonstrated by Matt Kuchar and Fred Couples.

To compare the two, we have video from the 2010 Masters, from the par three 16th hole (see the Master’s scoreboard in the background?).  Both are probably hitting about a seven iron. The pin is in the same place, since the video was shot on the same day.  They also are standing in almost identical parts of the tee box (but at different times of the day, note the shadows are a bit different).

Have a look, here is Matt:

And here is Freddie: 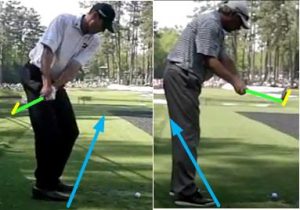 To compare the two swings, run these videos until the shaft is parallel to the ground. Then have a look at the important angles relative to the target line.  This gives a good indication of their respective backswing planes.  I have put Fred and Matt side-by-side for easy comparison:

Matt is lined up at the target or slightly closed, Fred is lined up open to the target (alignment shown with the blue line).Matt’s takeaway and backswing plane is low and flat.  Fred’s backswing plane is high and upright.  The shaft is highlighted in greenBoth Matt and Fred have the clubface (in yellow) slightly closed at this point in their swings.

Overall, you would have to agree that their swing planes look quite different at this point in their swings.