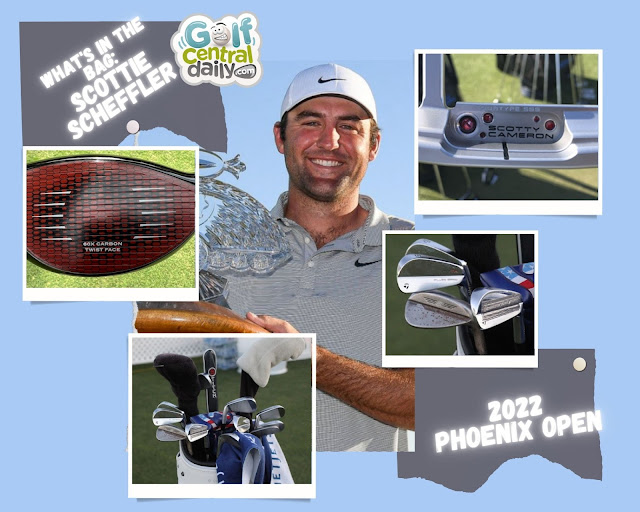 He did hold us all up on switching over to watch the Superbowl but there was something great about Scottie Scheffler getting his first PGA Tour win at the WM Phoenix Open.  The 25 year old went on a four birdie run coming home but agonisingly missed a six footer on 18 to seal the win.
That set up a playoff with “Stone Cold” Patrick Cantlay and on the third playing of the 18th hole, Scheffler canned from 26 feet to set up a hugely popular victory, which was celebrated for all of five seconds by the broadcasters before all of America's attention turned to the Rams and the Bengals!
The win sees Scheffler jump to a career high ninth in the latest World Rankings.

What's In The Bag Scottie Scheffler

Using the new TaylorMade Stealth driver Scheffler hit 35 fairways over the four rounds (T18 in accuracy) and averaged a healthy 327.9 yards (8th in the field). In total he ranked 5th in SG: Off-the-Tee with 5.226.
That laid the foundation for 56 greens in regulation with his TaylorMade P7TW irons, 8th in the field.  Around the greens Scheffler was tidy with his Titleist Vokey SM8 wedges gaining a SG: Around clip of +2.776, also 8th in the field.
Using a Scotty Cameron Special Select Timeless Tourtype GSS Prototype he amassed 26 birdies for the week, first in that stat, versus eight bogeys and one double. He ranked 2nd in SG: Putting (6.494) and 2nd in putts per GIR (1.571).