Skip to content
Editor's Pick
Justin Thomas and a monumental short game came from the wings to be the star of the show at the WGC FedEx St Jude.   The final dress rehearsal before the PGA Championship took place again behind closed doors but there was no shortage of drama.
The difficult TPC Southwind played its part claiming overnight leaders Brendon Todd and Ben An early. Brooks Koepka, showing no signs of the knee injury the week before a Major, was a threat throughout before finding water from the tee on the final hole to end his hopes.
Surprise of the tournament was Englishman Tom Lewis who took home a cheque for $695,000 after finishing in a tie for second with Koepka, Daniel Berger and Phil Mickelson.
In the end though Justin Thomas ( with stand in caddie Jim ‘Bones’ Mackay)  won by three clear shots, shooting 65 and giving an exhibition of wedge play. The win elevates him to No.1 in the latest Official World Golf Rankings.
Thomas is now the clear 10/1 favourite in early betting for this week’s PGA Championship. 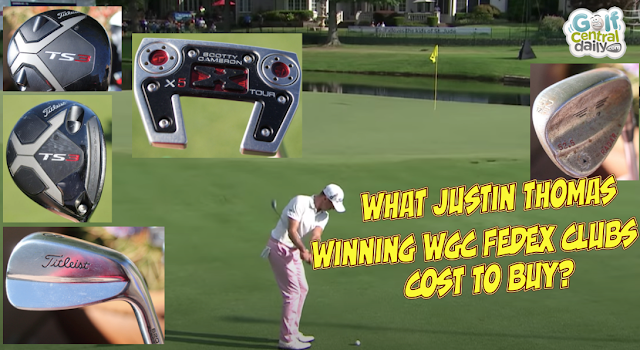 How he Did It

Justin Thomas drove the ball on average 295.5 yards for the week with his Titleist TS3 driver finding 69.6% of the fairways in regulation.  Using his Titleist 620MB irons the 27 year old found 51 greens in regulation, including 13 of 18 Sunday. Strangely but perhaps fittingly given the toughness of the test it was Thomas’s selection of Vokey SM7, SM8 and wedgeworks wedges that proved the difference, extricating him from trouble when most needed.  Interestingly JT won with a (very rare on Tour) negative Strokes Gained Putting clip of -0.470 using his Scotty Cameron X5.5 Tour Prototype. Over the four rounds Thomas circled 19 birdies versus 6 bogeys.