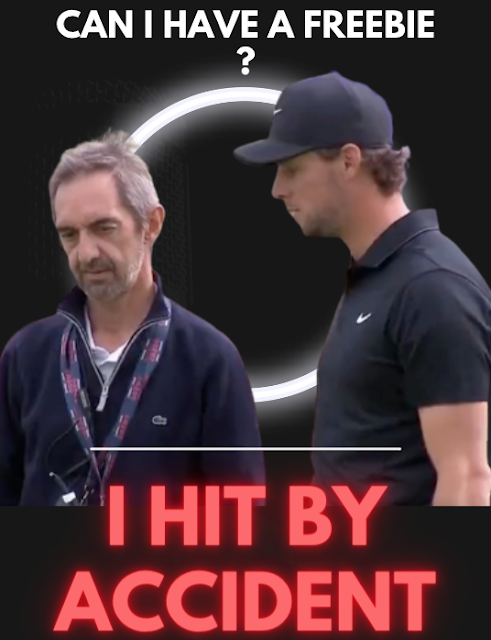 Bet you never heard of this rule before! If a baby cries as you are putting, and you try to stop yourself but end up hitting the ball, and it's a really sh!tty putt, you can replace it.  Free of penalty. Free of charge. No problem.
And we learned all this from Thomas Pieters at the Cazoo Open de France.
He was stood over a 35-foot birdie putt at the weekend about to pull the trigger when a child cried causing him to almost “yip” the ball forwards.
It was pretty obvious that, being one of the best players in the world, he wouldn't have hit the putt that terribly in ordinary circumstances,  and this was sort of an “accidental” hit. But what would the referee say?
Surely he'd say “Rule something dash something states “‘TOUGH SHIT' and get on with it.”
But no! The officials agreed with Pieters, let him replace his ball and retake his putt.  They said this comes under Rule 13d of the Rules of Golf which covers accidentally causing a ball or ball marker to move on the green…….. “There is no penalty if the player, opponent or another player in stroke play accidentally moves the player’s ball or ball-marker on the putting green.”
So there we go!!  I don't know how many times I've clipped the ball accidentally during my practice putting stroke and took my punishment.  Hmmmm I wonder that this cover it???!!

Thomas Pieters mishits a 40 feet putt but manages to get a free drop after claiming he did not mean to hit the ball at the Cazoo Open de France! 😮 pic.twitter.com/Phvhl3ViaO

Did you miss our previous article…
https://news-golf.com/editors-pick/patrick-reed-slips-outside-world-top-50-as-ranking-strategy-backfires/