Skip to content
Editor's Pick
Golf’s third week back at the Travelers Championship saw the PGA Tour begin to wheeze under the weight of Coronavirus concerns but ultimately pull through.
From early on in the week things did not go to plan. There were positive tests of players and caddies.  Major Champion Brooks Koepka became the first “high profile” withdrawal after his caddie Ricky Elliot tested positive for COVID-19.  Head honcho Jay Monahan was whirl winded in to firefight the situation, and to his credit the flagrant violations of social distancing and protocol of the previous fortnight on Tour were, for the most part, eliminated.  But the stark reality if the virulence of Coronavirus was again brought into focus on Sunday when Dylan Frittelli tested positive.
On a positive front, organisers successfully managed a weather delay Sunday to get the event concluded with Dustin Johnson putting his way into the winners circle after an exciting final round.  For DJ it was his first win in 16 months, edging mister accurate Kevin Streelman by one shot. 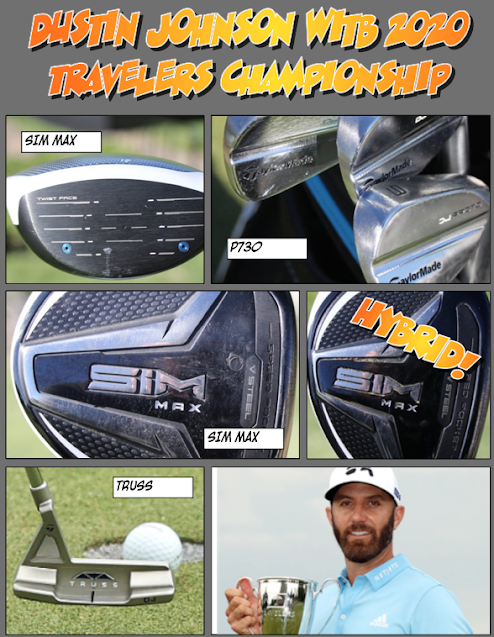 Never afraid to change up his equipment, the Travelers saw the TaylorMade staffer go with SIM Max in all his woods, even adding two hybrids to his bag (as did Rory McIlroy) for the week.
For the tournament Johnson hit 35 fairways (T47 in the accuracy stats) using his TaylorMade SIM Max driver and fairway averaging 303 yards from the tee.  But when he wanted to go big, he went BIG, as evidenced by a flushed 351 yard drive on his 72nd hole.
With his TaylorMade P730 irons Johnson hit 56 greens in regulation for a T18 field clip and impressive 77.8% success rate.
On the greens DJ was in form throughout, navigating the oft-times difficult breaks of TPC River Highlands expertly with his distinctive TaylorMade Truss TB1 putter. In total he took 110 putts, T5 in the field and a Strokes Gained: Putting total of 2.19 in the final round.
In total Johnson circled 25 birdies versus just 6 bogeys. He has now won at least once in every season since joining the PGA Tour in 2008 bringing his total victories on the tour to 21.