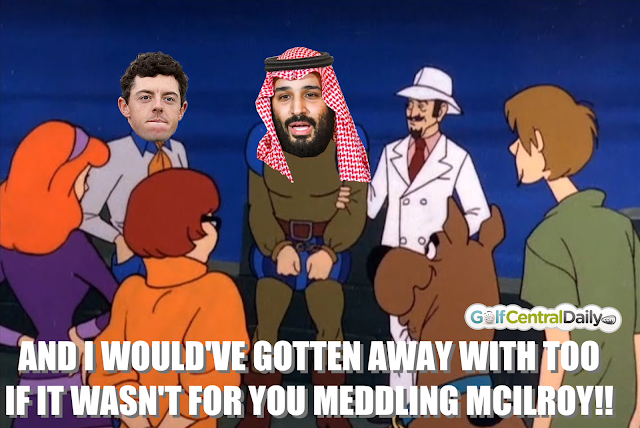 Oooohhh those Saudi tricksters are at it again.  You turn your back for one second and they’re all over Florida tempting players to leave the PGA Tour and ride off into the sunset to theirs.
The Saudis wont let the Premier Golf League idea lie and seem oblivious to how pretty much the exact same idea in soccer i.e. the Super League was received last week.
The Crown Prince of Saudi, yep that guy that dissolves journalists in acid, is the financial backer and driver of Golf Saudi  and he has royally pissed off PGA Tour Commissioner Jay Monahan with his antics.
Jay is definitely taking this guy seriously vowing immediate suspension and expulsion from the PGA Tour to any player signing up.
Greg Norman, that guy with his arse out in the shower, is rumoured to be the chief advisor.  And his key bit of advice? Offer loads of money to the lads. Like $30-50 million to Dustin Johnson and the likes of Justin Rose,  Brooks, Bryson and others.  Even guys that are possibly not as competitive like Henrik Stenson, Adam Scott and Rickie Fowler are said to have been offered mega cash. Up front.
But every rebellion needs a leader.  And who better to head the revolt than Phil Mickelson for a cool $100 million?
The money sounds crazy, the organisation and methods seems clumsy and haphazard right now, but as long as the oil flows,  this wont go away.
Sooner or later they will figure it out, people always follow the money.

Did you miss our previous article…
https://news-golf.com/editors-pick/2021-wgc-dell-matchplay-betting-who-will-win-each-group/