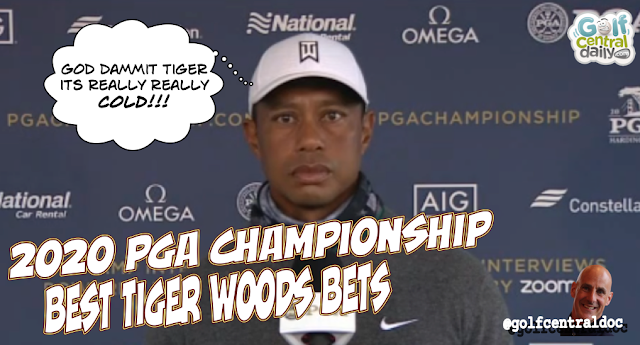 A more prudent bet might be Woods at 3/1 to finish in the top-10.  That would see him use all of his shot making magic to grind out a score on a course where others will undoubtedly fall away and where par seems like it will be well defended.
Will Tiger putt well enough to contend this week?  There’s two schools of thought here. Some see him practicing with his backup Scotty Cameron putter and not his his famous Newport-2 putter he used to win 14 of 15 Majors. And they don’t like that.  Tinkering with equipment the week of a Major does not inspire confidence.
This new putter is similar but has adjustable weights on the sole. Then there’s the argument that we all get a honeymoon period of a couple of weeks with any new putter where everything goes in!
Breaking down Tiger’s performances in his last events you see that that seven of his last eight round have been in the 70’s.  Half of them have been 76 or higher.  He has however made the cut in his last events.  To make the cut at Harding Park this week he is 4/11 but to miss it he’s 2/1.  I know it’s a terrible thing to say but that could be a popular bet.
Then there’s the weather at Harding Park.  Cold chilly windy conditions that change during the day. Woods has already said they’ve affected him.
“I think that for me when it’s cooler like this it’s just make sure that my core stays warm, layering  up properly,” he said. “I know I won’t have the same range of motion as I  would back home in Florida, where it’s 95 [degrees] every day. That’s  just the way it is.
“Talking to some of the guys yesterday, they  were laughing at their TrackMan numbers already.  They don’t have the swing speed or ball speed they did last week. It’s  just the way it is. It’s going to be playing longer. It’s heavy air weather and whether the wind blows or not, it’s still going to be heavy.  The ball doesn’t fly very far here.”
The final interesting bet on Woods is to be top former winner at 6/1.  To do that he has to beat Justin Thomas, Brooks Koepka, Rory and Jason Day.  A tough ask on the face of it but what if Brooks and Day struggle again with recent injuries, Rory is again off form and Justin Thomas is exhausted from winning last week.  It might be worth a squeak!
Tiger is not for me this week, but I’ve wrong more times than right post lockdown and there’s nobody I would like to see win more.  Except Shane Lowry obviously!!!