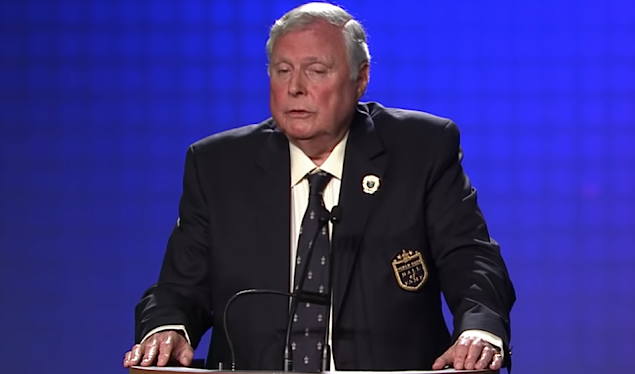 Since news of the passing of Peter Alliss broke at the weekend, there have been many great tributes online but I particularly like this speech at the World Golf Hall Of Fame in 2012. Where Peter’s Dad inflicted two German golfers with the worst slice imaginable to get them back for shooting him twice in the Great War!
I also like this speech by the great man at the 2014 World Golf Awards.
In it Peter doesn’t just talk about himself, but about how his Dad came to discover the game of golf and how it all took off from there. Leaving school at 15 to play golf on the advice from his father that it would keep a roof over his head and food on the table, Alliss would go on to record 31 professional victories and play in eight Ryder Cups.
And as for his teacher, Mrs Weymouth’s appraisal in 1947 that Peter “does have a brain but he keeps it very well concealed,” it does chime with the one thing Alliss did learn in school and that’s his quick wit and incredible turn of phrase.
It encapsulates all the best of Peter, a gentleman, a storyteller, a character with an unrivalled depth of knowledge.
I posted this on twitter.  An example of Alliss at his wittiest, talking about Carole Vorderman on Countdown!

Rest In Peace Peter Alliss. This was one of her best ever! On the subject of @carolvorders on Countdown!#peteralliss #Golf pic.twitter.com/z0QKbKYyP6

This is another great speech from the World Golf Hall Of Fame in 2012. Where Peter’s Dad inflicted two German golfers with the worst slice imaginable to get them back for shooting him twice in the Great War.

Did you miss our previous article…
https://news-golf.com/editors-pick/keith-pelley-appears-at-four-seasons-total-landscaping-to-say-european-tour-in-robust-health-after-firing-68-staff/