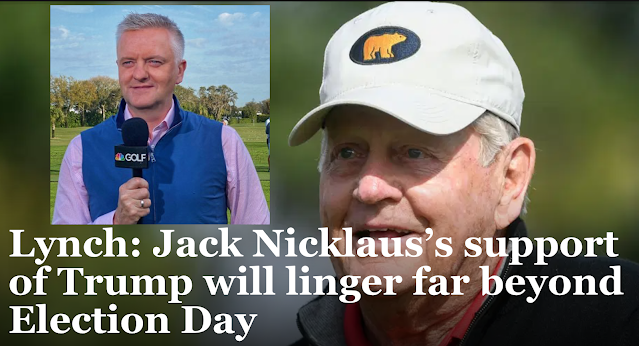 I came across this piece from Eamonn Lynch in Golfweek today. Any boy did it ruffle feathers. With the US Election Day just a few hours away nobody it seems is safe.  Not even Jack Nicklaus.
The Golden Bear’s vocal endorsement of the golden haired Donald Trump doesn’t seem to be because he wants a few free rounds of golf at one of Donald’s many courses around the world.
Oh no.  Jack who got the Corona virus himself and reportedly got better in two days after taking hydroxychloroquine suggested hospitals are deliberately bumping up the Covid-19 deaths in order to make more money.
Lynch described Nicklaus’ comments and views on the matter “outlandish tripe from a respected public figure would usually attract the social media firing squad, but Kim Kardashian’s birthday party hardships drew the harshest volley of shots in another direction.”
Jack may be a legend in the world of golf but Lynch believes no man, or woman in the case of Nancy Lopez, also a Trumper, is above scrutiny.
“And regardless of their choice in candidates, their unimpeachable careers have earned both the right to be taken seriously when they speak on issues of integrity, honesty, character and fealty to the rules. But it’s wishful thinking to believe they won’t find themselves shadowed by charges of hypocrisy given their enthusiastic support for a man manifestly destitute of any of those qualities.”
Guess that’s Eamonn off the Nicklaus Christmas Card List. Himself and Dr Anthony Faucci! 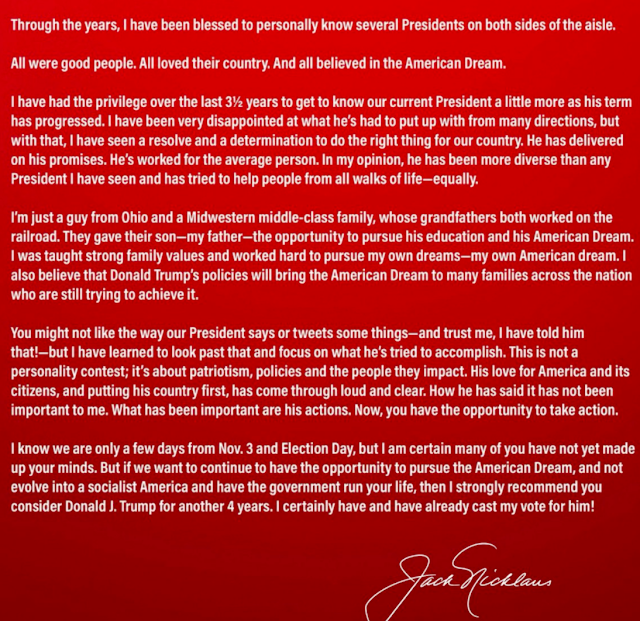 Did you miss our previous article…
https://news-golf.com/editors-pick/eating-and-benching-their-way-to-the-masters-brysons-theory-is-the-same-as-tiger-in-his-prime/