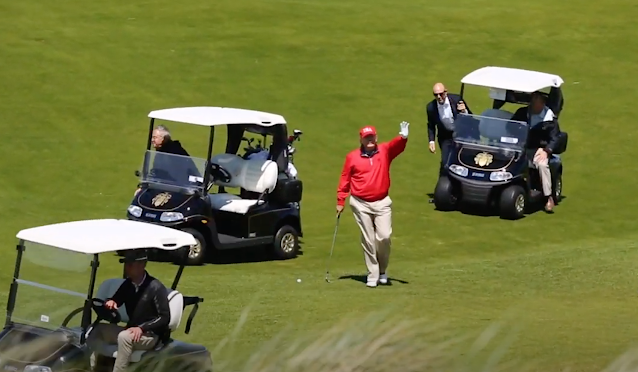 As if things couldn’t get much worse for Donald Trump at the moment, Forbes is reporting colossal losses on his Scottish and Irish golf properties, which includes Doonbeg in Clare.
Turnberry, on which Trump has spent $130 million, now has losses of $61 million since 2014.
Aberdeen has lost $15.5 million since 2012.
Doonbeg was reportedly bought for just less than $20 million in 2014 and got a $12 million upgrade over the next four years but now has losses of $10.5 million up to the end of 2019.
Whatever you think of the man, think of the jobs and employment Doonbeg has created and sustained in that area of Clare. The 2020 season was a write off, with little of no inbound golfing travel to Ireland, and sure to signal more losses.
We’re now in January 2021, normally the time when prospective golfers hit ENTER on their travel bookings, and we still have no real timeline on vaccine rollouts, or signs that world travel is returning to anything like normality.
Not even Donald can “pardon” all this debt, it’s going to come to a head at some point and that’s a major worry.

Did you miss our previous article…
https://news-golf.com/editors-pick/if-corona-virus-did-this-to-greg-norman-imagine-what-it-could-to-mere-mortals/