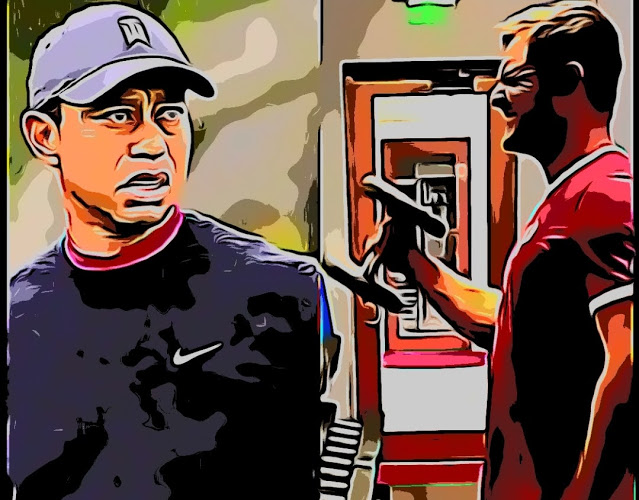 Food glorious food!  This crazy year brings golf fans us one last sumptuous dessert in the form of The Masters in two weeks time.
A tradition unlike any other, the Champions Dinner is just one essential ingredient in the spectacle of the Masters Showpiece. Jack Green notes in his excellent blog post that Tiger Woods, now on his fifth menu, will serve the assembled past winners  “sushi and sashimi to start, steak and chicken fajitas for the main course followed by strawberry and vanilla milkshakes.”
This year however food could play a very different role in proceedings with one Bryson DeChambeau gone into very public hiding (if there is such a thing) to gorge and bench himself up to 400 yard drives.  The ‘controversial’ theory he’s working towards, which everybody thought was bonkers at first until he went out and blasted his way to the US Open title,  is that (and I’m voicing his thoughts here) if I eat enough, and pack on as much muscle as possible in the gym, I can overpower Augusta just like I did Winged Foot.  I can train myself to attain a 200 mph ball speed and drive it 400 yards. I can then take on the dog legs, hit over the trees, there is no rough in Augusta, I’ll have short irons into the fast greens and I can pick up easy birdies and eagles.
Will it work? The bookies seem to think so.  Bryson is the clear 8/1 favourite across the market. 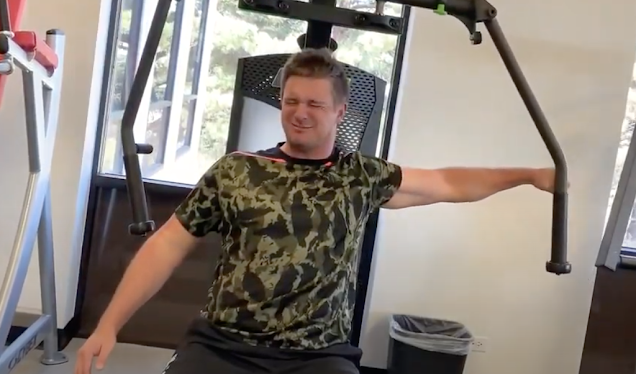 But can science really beat tradition? He’s only played in three Masters.  He’s never even finished in the top-20.
Why not say the bookies?  Before the won the US Open, he had missed the cut in two of the five he played and never featured on the first page of any leaderboard in the others.  Power pays out.
And then there’s Tiger Woods.  He cut a forlorn figure at Sherwood Country Club last Sunday alongside Phil Mickelson, not dead last but as close as damn to it. A full 18 shots behind the winner on a course he used rule.
The defending Masters Champion is 25/1 across the board in the betting.  Low odds considering sightings of the GOAT this year have been few and far between.  And when he has emerged (a T9 at The Farmers excepted) it hasn’t been the Tiger of old.
But then you have to consider Woods at Augusta. Is his approach that different to Brysons?  He’s won it as a lithe skinny kid,  he’s won it in very much the same shape as Bryson is working towards now, a musclebound block, he’s won it in the shape of a Navy Seal, and he’s won it skinny-er in 2019.  Perhaps the bookies odds are a doff of the cap to that incredible triumph of power over injury.
Woods workout regime in his prime was legendary. Get up in the morning and run four miles. Then go to the gym to lift weights. Then hit balls for three hours, then play on the course, and then work on his short game. Then another four mile run, then play basketball or tennis with friends in the evening.  Needless to say, he doesn’t do any of that now.
In fact Woods looks back at running as the thing he regrets most. “Running over 30 miles a week for probably my first five, six years on Tour pretty much destroyed my body and my knees,” he said. 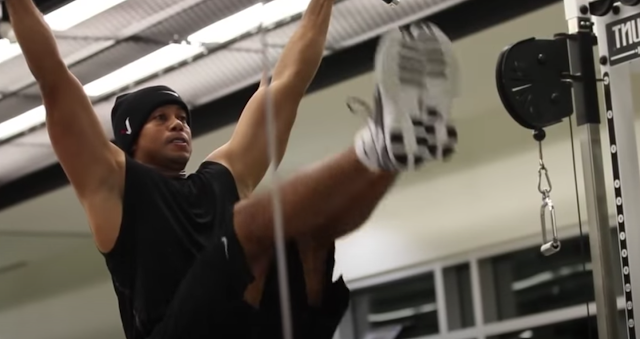 Woods’ back, knee and Achilles injuries are well documented. He’s had four back surgeries, the last in April 2017, and five operations on his left knee.
But whatever Woods shape, he has always steadfastly maintained that “Power” is paramount to winning.
Trying to get right “mind body and soul four times a year” is Woods main golfing focus nowadays.  By his own admission he sacrifices the odd tournament here and there in order to be at his best for Majors.
The now 44 year old full time Dad, part-time golfer, is still focussed on his own physique and fitness.
Walking around at a lighter weight than in his bulked up prime Tiger is still a disciple of “putting weight on” before a big event.  Two weeks out from defending the Green Jacket he’s also “Eating. Protein shakes and lifting and maintaining the muscle mass.”
So is Tiger Woods’ approach different to Bryson DeChambeau?  The answer is no.  Looking back, Tiger says of himself in his prime, “I felt like my distance gave me a couple of shots advantage over the field every time.”  Is that not what Bryson is trying to achieve in 2020?
“The game has evolved,” Tiger says. “It’s not about the precision short player having dominant runs anymore. It’s about the power players.”
“My Dad was a big proponent of absolutely hitting the ball as hard as you can. On two conditions. One, you can maintain balance, two, you can guarantee you hit the ball in the middle of the face. If you cant do any one of those two, you cant swing that hard.”
The four course feast starts on Thursday 12th November.

Did you miss our previous article…
https://news-golf.com/editors-pick/ra-responds-to-kick-up-the-arse-by-finally-giving-covid-grant-to-irish-clubs/