Skip to content
Editor's Pick
Adam Scott rolled in to Winged Foot completely under the radar for the 2020 US Open.  But is he the perfect sleeper at 40/1?  I’ve taken a look at his credentials.
Follow @golfcentraldoc
Related: 2020 US Open Betting Preview And Tips

When it comes to “rested” you won’t find fresher than the Aussie.  He has played a total of 11times in the entire 2020 wraparound season and just three times post lockdown.
He won his home Australian PGA Championship then won again in February at Riviera (Genesis Open).
Scott returned post lockdown to play the PGA Championship, finishing T22 at Harding Park.  Last time out the BMW Championship, he sat in third heading into the final round at Olympia Fields before a Sunday 75 dropped him to a T25 finish.

Key positive in the stats for Scott is Greens In Regulation.  In his 11 starts this season, he finished in the top-5 in the GIR stats 5 times.
This despite a driving accuracy percentage of just 55.49%,  ranking 161st on Tour.  If he is to contend at Winged Foot he’ll have to hit fairways.
All my caddie intel says around the green will be extremely difficult at the US Open and this is another area where Scott excels.  On the PGA Tour stats he sits 9th in Strokes Gained around the green and 6th in Scrambling from the rough.
Putting has traditionally been the area where Scott has lagged behind the field.  However this week, with the insane undulations and high tariff green complexes (not dissimilar to Australian courses), the winning score is expected to be level or over par and 3-Putt Avoidance will be crucial.  This is Scott’s forte.  He sits 9th in the stat on Tour.

Scott by his own admission now gears his career towards the Majors.  He has 19 top tens since his Major debut in 2000. After losing the 2012 Open Championship, Scott won the Augusta greens in 2013. He top-10’d in two of the 2019 Majors, finishing T7 at the US Open in Pebble Beach. 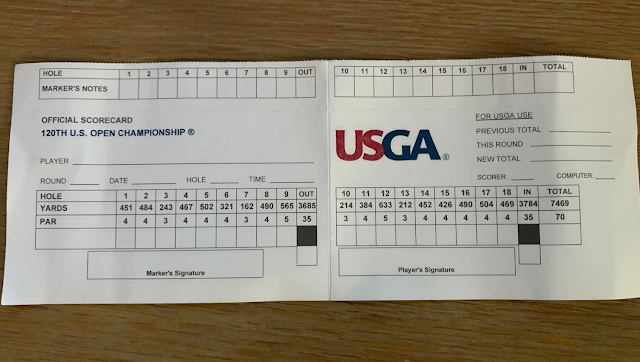 Scott looks a viable each way shot at 40/1.  He started the week at 50/1 and with money coming on, his odds are shortening daily.  There’s no doubt he has the ball striking prowess and that inbuilt Australian knowledge to get up and down which gives him a huge advantage.
His perceived weaknesses converting on the greens might actually be a plus this week, where 3-putt avoidance will instead be the key.
But what will decide Scott’s fate this week is the platform he creates for himself off the tee.  With the total yardage nigh on 7500 yards for a par 70, he’ll need to be on point with driver in hand.  Is Scott worth a healthy bet?  Each way yes.