Skip to content
Editor's Pick
Before we start on DraftKings make sure you check out my 2020 RBC Heritage Betting Preview And Tips Post here.

Rory McIlroy is $11,300 this week, Harbour Town should not suit his game, but the same applied last week and he managed Colonial well until Sunday.  The short accurate guys and best putters always win the RBC Heritage so I’m baffled at the price.
Justin Thomas is $10,900 and was T11 here in 2015.  In 2020 he’s 4th in Strokes Gained Tee-to-green and 12th in Greens in Regulation and maybe a better play than Rory. 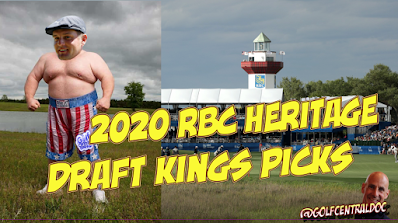 Bryson DeChambeau is $10,700 and looks a decent bet with a T3 and T4 here in the recent past. But I do not know if he can get away with attempting to bomb his drive across every corner this week.  It worked at Colonial but it was high risk stuff for a clever guy.
Jon Rahm is $10,500 and again its hard to match his game to this course.
Pick 1: Xander Schauffele is $10,200 and looks value.  Super straight and looked the ticket last week but for a cruel lipout on 17.
Collin Morikawa is $10,000 after coming close at Colonial, he’s a debutant at Harbour Town but looks the real deal and is on a cut streak of 22 events.
Sungjae Im is $9,700 and he was THE MAN before the lockdown. How long before he rises again?
Pick 2: Justin Rose is $9,200 and looks value also.  Played some super golf last week, back with clubs he likes, fit and strong and clearly practiced hard during lockdown I like him this week.  I’m thinking of him winning at Merion on this week a few years ago, Hilton Head is similar.
Webb Simpson is $9,000 and he played shit last week so its hard to figure if he’s worth picking. Runner up in 2013, T-5th in 2018, on paper he should contend.
Daniel Berger is $8,900, but winning last week takes a toll with all the press and media and celebrations!!
Patrick Reed is $8,800 but can never figure out Hilton Head.
Jordan Spieth is $8,700, was T-10 last week and looks a decent pick.  But there’s a frailty now surrounding Jordan that he really needs to shake off pretty quick.
Brooks Koepka is $8,600
Dustin Johnson is $8,500
Pick 3: Gary Woodland is $8,400
Of the three I like Woodland. Slimmer this year and very consistent. Impressed me at Colonial last week.
Matt Kuchar is $8,300 and he’s a wily old campaigner who knows how to mooch his way around here better than most. T2 last year and winner in 2014.
Abraham Ancer is $8,000
Tyrrell Hatton is $8,000.
Shane Lowry is at $7,800
Of the three Shane Lowry has a natural game to suit Hilton Head.  Great up and downer and T3 last year.
Pick 4: Branden Grace is $7,800 and looks a super pick. Former winner of the Heritage and very impressive at Colonial.
Kevin Kisner is $7,700
J.T. Poston is $7,500
Both like Hilton Head.
Pick 5: Jim Furyk is $7,100
Pick 6: Luke Donald is $7,000
Arguably two of the best performers in recent times at Hilton Head, dont count them out. Furyk actually played well last week except for a Sunday flop, and Donald was T11 at the Honda before lockdown.