In the second part of this series, we look at the first and biggest of the new breed. 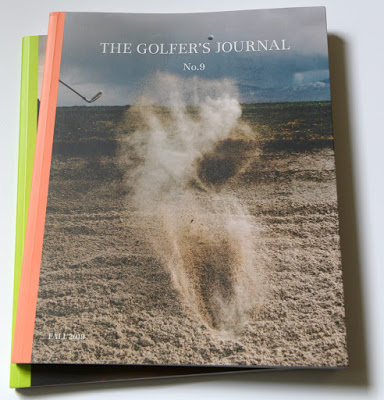 The Golfer’s Journal has certainly set new standards in how we look at golf and how it appeals to us. The magazine’s tagline – Golf in its Purest Form – means the magazine bypasses short game tips and equipment features and goes straight to the heart of the game. You won’t find this ripped and battered in a doctor’s waiting room; this will be proudly displayed on a bookshelf or coffee table for it digs under the skin of golf’s modern crush and finds its soul.

Full length feature articles can run over five thousand words and nothing is off limits. As Issue 9 lands on doormats around the world, subscribers will be reading about Griffin Clark, an American legend you’ve probably never heard of, the nomadic existence of golf architecture’s shapers, Tom Coyne’s literary hero who loves to play, the origins of Sweetens Cove Golf Club (Tennessee), and Scotland’s Montrose Golf Links and its endless battle with the elements attacking its coastline. Past issues have included major pieces on Carne and Lahinch’s Klondyke. These are in-depth and emotional stories, supported by photography that goes way beyond the usual green-at-sunrise shot. There is a dustiness, a sepia-influenced tone that gives imagery a raw edge. It’s beautiful. Perhaps that’s where The Golfer’s Journal stands out: it combines the written word with the image to take golf stories to a higher level.
The origins of The Golfer’s Journal date back over a decade. Brendon Thomas was then the Editor-in-Chief of SURFER Magazine, the oldest and most respected action sports publication. He was also a golf nut who saw that traditional golf media were missing a huge part of why people play the game and that there was an entire culture being neglected by the mainstream golf world.
“I wanted to create something that celebrated the culture of golf and wasn’t so narrowly focused on playing better or idolizing those that played better than the rest of us,” says Thomas. The magazine’s goal is to: ‘cover the game wherever it may be played, casting a sophisticated light on the culture, history, places, and characters that define the game’s unique personality and undeniable allure.’
The Golfer’s Journal relies on subscriber support for funding. By not being beholden to advertisers (there are only six ads per issue) the magazine has the freedom to indulge in longer-form content and topics away from the mainstream.
This approach has proved remarkably successful. Intriguingly, Thomas acknowledges that his audience crosses over: “Mostly our audience are digital first and see The Journal as something physical to act as a ballast to their online feeds.” It demonstrates an interesting balance in how golf is consumed: despite the access to so much online information there is still a demand for more thoughtful and comprehensive armchair content.
Any project needs that second of clarity when the optimism of hard work, passion and collaboration teeters on the edge of insecurity. In other words, is it going to work?
“There was a moment of calm between when we shipped the first issue and when the first issue arrived in people’s mailboxes. It was a nervous time,” admits Thomas. “We had the benefit of some strong interest in the golf space during production, through some of the people who had worked on the first issue with us, and when the first copies landed they started unboxing their founding issues online. It set off a tidal wave of people posting images of the first issue arriving around the U.S. That, along with incredibly good reviews and endorsements led to the orders flooding in and those subscribers in turn posted images of their issues online. It was like a runaway train at that point.”
And so it has remained. With the ninth issue recently published, prevous issues sold out, a popular podcast hosted by the very familiar Tom Coyne, and five sold-out events The Golfer’s Journal is steering golf media in a new direction.
It’s no surprise that traditional golf media have started to follow Thomas’s creation in both editorial and philosophical direction. The sincerest form of flattery it seems.