Symptom: You are not sure which golf club to use on approach shots.

Like most of your playing partners, you usually don’t choose enough golf club and are more often short than long.

You often say, “must be more uphill than I thought” or “I guess there’s some wind up there” or “maybe I didn’t quite catch that one flush” or similar lame utterances.

Overview: If in doubt about which golf club to use on your approach shot, take one more club. If debating between a seven and eight iron, for example, choose the seven iron.

Why it works: The vast majority of high handicappers leave their approach shots short of the hole. Pay attention to this the next time you play with your buddies — I’ll bet it’s true in your foursome too.

Ideally, half your shots would finish past the hole, and half short of the hole, so that on average you end up pin-high.

By choosing a golf club that will get you to the hole, you will end up closer to the pin on average.  This will leave you shorter putts, which will lead to lower scores.

The Underused Skill of Choosing the Correct Club for Approach Shots 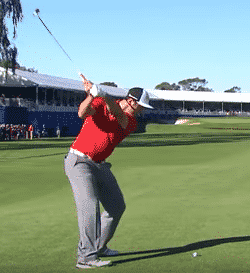 Jon Rahm made sure to get the ball all the way to the hole on his approach shot.

Think this applies to everybody else, but not you?  I challenge you to keep track of this the next time you play.  I’ll bet you are mostly short of the pin on your approach shots!

By taking one more club, you also protect yourself against a slight mis-hit.  A longer club will carry the ball further, and allow you to still end up fairly close to the pin despite your less-than perfect shot.

This takes a lot of the sting out of your bad swing, because your result is still decent, which helps you forget that bad shot and keep your round going.

Finally, if you happen to flush the ball such that it goes over the green, at least you can have the satisfaction of saying, “wow, I really hit that one flush”, which is a positive thought that will help you get up and down from wherever you end up.

Let’s have Jon Rahm demonstrate for us. He came from behind to win this tournament.   You can bet he chose golf clubs that would get the ball all the way back to the hole!  Have a look:

Combine this strategy with aiming for the center of the green instead of the flag and you can help mistake-proof your game.  As your mistakes disappear, so will the strokes, and you’ll find your handicap getting smaller by the round!

One final thought:  Many Occasional