Symptom: Poor shots out of fairway bunkers.  You always come up way short of the green, if you even make it over the lip.

Or worse yet, you have a morbid fear of hitting out of a fairway bunker. This fear causes you to aim too far away from the fairway bunker, and so you end up in the rough, blocked by trees on your approach shot to the green…

Overview: The fairway bunker shot is not too difficult if played properly.  It mostly comes down to making sure you hit the ball first and setting yourself up to ensure that this happens.

Follow the step-by-step approach and you will squash the fairway bunker blues for good. 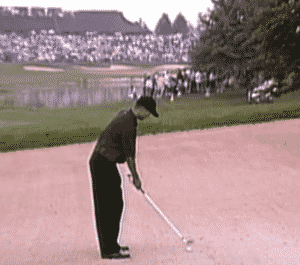 Tiger Woods plays out of a fairway bunker, over water, with the tournament on the line.

First and foremost, realize that you must hit the ball first (as opposed to an explosion shot, where you hit the sand first).  This basic fact seems to elude many Occasional Golfers.Take one or two more clubs than usual (a seven or six iron instead of an eight iron, for example), but make sure you can get over the lip of the bunker with whatever club you choose!Work your feet into the sand for traction.  You will sink down into the sand a bit as you establish a stable base.Choke up on the club a bit to compensate for your feet now being a couple of inches deep in the sand.Put the ball an inch or so back in your stance from what you would normally play, to make absolutely sure you hit the ball first.Make a smooth and controlled swing, a little less than a full swing.  Your feet will slip and slide a bit in the sand and you can’t overdo your swing.  Remember, you have one or two extra clubs because you followed the advice in step 2.Don’t try to be a hero — the most important thing is that your next shot be from the fairway or the green.  So aim at the middle of the green.

The good news is that your ball will seldom be buried in a fairway bunker since it will have rolled in from the fairway.  You will usually have a good lie in the sand.

Why it works: Out of the sand, the ball will have more spin than usual because you must hit the ball with a more descending blow than normal.

And, you won’t be able to swing too hard due to your poor traction in the sand. That’s why you need to compensate by using

Did you miss our previous article…
https://news-golf.com/golf-lessons/golf-swing-tips/titleist-tsi2-tsi3-driver-review-combining-speed-and-forgiveness/