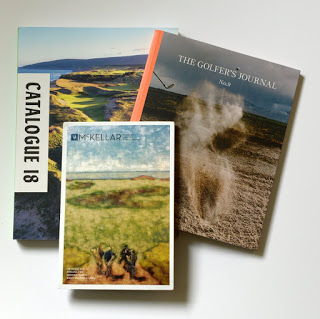 The third magazine to be covered in this three part series is an interesting hybrid of origins.

McKellar
Country of Origin: USA (sort of)
First Issue: May 2018
Frequency: Occasional
Website: mckellarmagazine.com
Size: 100 pages
Podcast: Yes
McKellar was founded by the longtime Guardian correspondent, author and Scotsman, Lawrence Donegan, and Thomas Dunne, a golf writer and golf architect aficionado. Its evolution is best told by Dunne:
“I’m sure Lawrence would agree that Lorne Rubenstein of the Globe & Mail is kind of the spiritual godfather of McKellar. Back in 2006, when I was at Travel & Leisure Golf, Lorne and I went out for a long lunch at the Algonquin Hotel in New York. We had this great conversation about developing a more thoughtful, literary breed of golf magazine – something that readers would return to over months and years, rather than flip through idly and then pitch in the recycling. Well, it turned out that Lorne had been having that conversation with other writers, including Lawrence, and when he approached me about it toward the end of 2016 we were immediately reading from the same hymn sheet in terms of the stuff that mattered. 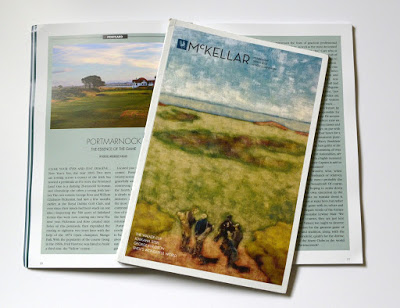 “What really unites us,” Dunne continues, “is that all of us believe that print – even

today, especially today – can offer a special experience to readers that the digital world, as powerful as it is, can’t match. It’s a sense of commitment on both ends of the transaction – publisher and reader. We’ve come to that place through long professional experience, Lawrence (mostly) through international newspapers and myself through high-end consumer magazines.”

McKellar’s goal is to: ‘bring together the finest writers, illustrators and photographers to celebrate golf’s history, to chart its future and to examine what makes the contemporary sport exciting, from travel and architecture to profiles of its most prominent personalities.’
Not surprisingly, there are similarities between McKellar and The Golfer’s Journal (as well as the Australian Caddie Mag). Both have proved that stories flow in more directions than a Portmarnock green with rarely a trip into the upper echelons of professional golf and equipment reviews. McKellar’s Issue 2 includes stories about Gil Hanse’s modern design at Ohoopee Match Club in Georgia, the hickory evangelist Ralph Livingston III, an ode to Ken Nagle, a hero of Australian golf, Conor Syme’s rookie year on tour and the battle that Royal North Devon Golf Club faces against the ocean. And that only scratches the surface. And yes, there’s a piece on Portmarnock.
This is a magazine about understatement, authenticity and devotion to quality, thanks to the work of some of the best writers and artists in the business (e.g. Rubenstein, Shackelford, John Huggan, Michael Croley, Derek Duncan, Tom Morton, etc.). And then there are the new voices: Quinn Thompson, a longtime shaper for Coore & Crenshaw, painted the cover of Issue 1, wrote a short piece to end Issue 2, and will appear again in Issue 3.
Articles aren’t as long as The Golfer’s Journal, with several short, punchy pieces matching McKellar’s small dimensions (at 6 x 9.5 inches it is little more than half the size of the Journal). It makes it a quicker read and one that’s easy to transport but it is written with the same passion for the game, its colour and its history. The imagery (photos and illustrations) is different, too. And there is no advertising. As with the other two publicatons covered here, McKellar exists thanks to a subscriber base of hardcore golf fans. The magazine has not been promoted beyond the basic social media platforms and word-of-mouth, so it’s no surprise if you haven’t heard of it.
Issue 1 received favourable reviews and Issue 2 came about thanks to a successful crowdfunding campaign by Donegan. It proves that quality writing and imagery is still sought after by golf fans. (This is not true across the board as other publications – e.g. Golfhacker and Codger – failed to survive a printed format.)
“We’ve demonstrated that we can produce a high-quality journal and make it sustainable,” Dunne says. “We did this on a shoestring budget, with no corporate backers. We’d like to grow our staff and our audience while maintaining the editorial integrity we’ve demonstrated to date. Here’s hoping the right partner or partners emerge, but as long as writers continue to see us as a venue for their best work, it’s not essential to our survival.”
For those wondering about the name, McKellar is named in honour of one Alexander McKellar, a 19th-century Edinburgh tavern-keeper and the man considered by Donegan and Dunne to be the original golf nerd.